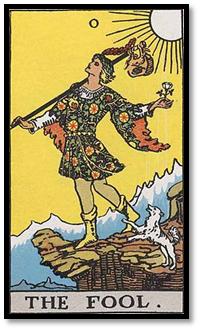 One of the joys of April Fools Day is getting “punked” – sometimes. Three years ago a web site sent me an email congratulating me that a video I had posted had gone “viral” – I thought I was famous for about an hour before an email from a friend revealed the “truth” — and deflated me once again.

The key to the experience is that the rug of “knowing” is pulled out from under us. So much of our existence is lived on bedrock of certainty about things, which when revealed as illusion, can be terrifying…. Or, upon further reflection, quite liberating…

I remember feeling relatively “safe” before the financial crisis of 2008 hit. Then, suddenly I feared that the savings I had accumulated would be rendered worthless and I would be destitute. I was certain that I was entering my father’s nightmare of hyper-inflation and anarchy…

Obama’s election temporarily appeased me but watching the news continued to fuel anxiety. I dealt with it as best I could until I found myself in an Eckhart Tolle discussion group, led by Michael Jeffreys.

Eckhart Tolle is the author of the Power of Now, and I hoped that by being “present” I could alleviate some of the demons that were haunting me.

When Michael asked a simple question he turned to me for the first time (we didn’t know each other) when he asked, “So, can you accept not knowing?”

Our eyes met and I realized that this was a core issue for me, and I shook my head fiercely and emphatically “no”. That was really the beginning of some amazing insights.

I had to confront the fact that I had bought into the (unquestioned) belief that I should and ought to “know” many things – how to earn a decent living, plan for the future, take care of myself and loved ones, and so on.

I should be “in control.”

And yet, right then and there, I had to admit to myself that I had to surrender – that ultimately there were many many many things I did not and could never know.

“I” was quite literally the April Fool.

Michael and I have had many conversations since about what we can and cannot know and as we delve into issues of philosophy and neuroscience, and “who” we really are, many certainties are peeled away, layer by layer.

This struck me yesterday when I saw the trailer for an upcoming documentary , Holy Rascals, on Facebook. There was a rabbi and the film maker, apparently a Christian, and with them was the subject of the segment, Prasanna.

In the conversation they explored what you could know, and the rabbi, after citing his “identity” as a Jew and a teacher admitted that as Prasanna suggested, there was only one thing he knew absolutely – for sure – and that was that at that moment he existed.

Every other “truth” was relative; namely it was a thought and essentially an assumption.

What was interesting is that so much of what we think we “know” has been taught to us by religion and other institutions; but these are all easily revealed as relative truths based on concepts. Even our name is a thought or idea. There is only one thing you know for certain. You are here now.

Whether through sophistry or direct argument, it can be demonstrated that everything besides the fact that you exist is ultimately a “relative” truth or idea.

Michael does another exercise which is to try to locate physically where in your body “you” reside. Many of us immediately point to a spot behind our eyes – ostensibly our brain. That’s because our idea about who we are – the sound in our skull – thoughts – are so compelling and real. (The key to this exercise by the way is to actually do it, and become quiet – not to think about doing it). You may well discover something surprising….

But of course you could be comatose or lobotomized and still “exist.” Your breathing, digestion, circulation and other functions would still “operate” – in fact so would some parts of your brain.

(As Eckhart Tolle suggests, it is a much higher “knowing” intelligence that truly controls those functions).

And you might even still dream… But as Eckhart Tolle also points out so well, “you” are what notices the thoughts that seem to define you – and that becomes your conditioned sense of self.

From the time someone calls you by name and you experience yourself as a separate being, this “concept” is reinforced over and over again until it becomes “second nature”.

Of course, the ultimate illusion of Descartes, that it is our thought that defines us (“I think therefore I am”) is the basis of all of our science, but it is quickly reversed upon any true self inquiry.

The “I am” that we think we are seems to be a “thing” – but the knowing is, as Eckhart Tolle calls it, “no thing.” It is rather a sense of “being here right now” – the only absolute thing we know.

Many of these other “concepts” seem incontrovertible based on our experience and survival – for example, if there is a cliff and you walk off it, you will die. Taking this as a “relative” truth and testing it for yourself can have dire consequences.

(Your absolute truth, your existence, may come to an absolute end).

So as we become “educated” and conditioned we gather within us a storage unit of such relative truths that we are ever more fearful to test through our own experience.

For example, going back to my own experience, the safety of saving money was a deep truth taught to me by my father which I held sacred.

Suddenly this truth was exposed as very relative – as long as money is “valued” then it can provide me with a measure of safety – but it can be quickly devalued as was threatened by the banks’ collapse in 2008.

(It is interesting to ponder that some civilizations like native Americans had no “concept” of property or owning land, which made Sitting Bull sign treaties he simply did not comprehend; of course when those contracts were enforced by the people who had thought them up, his relative and absolute reality ended.)

And indeed my father had the relative safety of a stable economy pulled from underneath him by the Nazis in 1939. It was the main reason he indoctrinated me with this fear – to keep me safe.

And like the cliff I assume will kill me, in this case the financial cliff fear may keep me safe for a while—but seeing that ultimately it is an unknown is the only way to stave off immobilizing fear.

But isn’t an admission of what we don’t know even scarier? It was at first – that’s why I shook my head so fiercely when Michael asked me that question.

But “digging deeper” as my friend Michael likes to say, it is actually quite liberating to recognize the true vastness of what we do not know, and drop the burden of illusory control.

It is stepping off this cliff, literally not figuratively, that can lead to a much richer existence, because it frees us from the thoughts and conditioned fears that truly imprison us.

I was watching a NOVA special on the meteor that hit Russia last month, and if I focused on this, as watching CNN would have me do, I would be terrified every morning when I got up.

Like the fear of a financial crash, the fear of a meteor hitting is a thought. Another thought can also make me realize that “science” thinks this only happens every 70 years, so I am “relatively safe.”

But the only absolute knowledge that I have is that all of these thoughts are relative truths, noticed as thoughts and ideas by the only “me” that truly exists – that which notices all of this.

I can certainly gauge other relative truths, and I will do so – such as when I turn the faucet, there will be water to drink.

But as the folks in New Jersey and Staten Island discovered recently, even that relative truth–that we take for granted so much of the time, can instantly be disrupted.

So we know that our time as “being here” in this physical form is limited and quite tenuous, and yet here we are. So while we’re here, the only absolutely essential response would be awe, and gratitude.

Everything else is a thought – many conditioned – many leading to relative fears. Let them go.