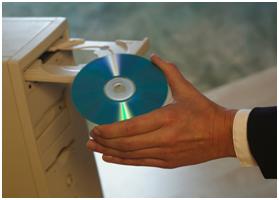 It is the core principle of this blog, and the main theme of the book I am completing, that computer software represents something completely new in human evolution, and is in fact a pointer to the true nature of both our species, and reality.

I first became fascinated with software when I needed a job in L.A. and got training in one of the first and most powerful dedicated word processors, the IBM System 6, at a law firm. The manager handed me a series of six large floppy disks, showed me how to load them into the console, and walked away. Several nights later, after completing the tutorial s on the disks, the machine had “trained me.”

So what is the software itself?

Certainly not the floppy disks which I used to learn System 6, nor the DVDs we currently use.

It’s not even the arcane progression of bizarre coded sentences that programmers write to get the results they want when the software “runs”.

Software is the first humanly created evidence of Intelligent Energy. The mental intentions of a (team of) programmers manifests through the code and exchanges information, energy, or mental vibrations with the user and the environment.

Another key aspect of comprehending the meaning of software is to understand a concept that I used to hammer home frequently when I taught people how to use complex software—the essential difference between a program and a file.

A file is a thing—the document I save for this blog is a file.

Microsoft Word, the application I use to create and modify this document is a program – it is an active agent of change, again taking the intention of the programmer(s) and providing a conduit between their desires (to help the user do word processing and in the process, go public and become millionaires) and the intentions of the user (to create a document) through precisely coded interaction.

This distinction between a program and a file is important for many reasons—not the least of which is that when you want to save your work—and especially when you try to back it up—it’s easy to safeguard your “things” — the files – on a second drive, and reuse them later.

In the early days of PCs, it was also relatively easy to save the programs on a drive and move them elsewhere—not you can’t do it because with the complexity of the operating system and the programs themselves (their “Evolution”, if you will), they require a sophisticated block of code called a Registry to function properly, and they are entangled with numerous other settings and blocks of software on your machine, specifically designed to protect the copyright and make the function better, so they cannot be easily moved and replaced.

So applications on the computer—the programs—are of a completely different Nature than files.

They are active agents of change in the environment—and the processes they invoke are only static when begun and completed—while the software is “in use” things are constantly changing—on a page, on the screen, in an email, you name it.

And in a word processor, for example, where the cursor is NOW–is the only place change can be intentionally implemented.

If you’re beginning to get the idea that software is the nearest thing that man has created that is Life-like (in our own image—using our own logic and mathematics), we’re on the same wavelength.

Buckminster Fuller famously said and wrote, “I think I am a verb.” I believe what he meant was that it is vital, when comprehending reality, to understand the essential difference between a thing and an intelligently intentional agent—an application.

Software is a an active agent of intelligent change that we have created that seems “alive” when the computer is turned on. But it is not a thing or a file—it is a being, primitive though it may be, for the duration that it “runs”, that manifests the intention of human intelligence.

There are files and there are applications on the computer—we are not mere files… We exchange energy and create meaning based on intelligence and intention, just as the software that runs in our computers does—and just as our bodies do with the instructions of DNA code.

Yet, so many of us act as though we are things. We are our jobs, our families, our identities—indeed we carry static images (licenses) that identify us for the purpose of “living” in compartments and categories.

But is that our interior experience—if we look closely?

Or are we as teachers like Eckhart Tolle suggest, never static things but instead verbs –the manifestation of Being—and isn’t that what software can effectively teach us as we use it day in and day out?

I’ve speculated in previous entries about whether the software that we create (Artificial Intelligence) will ever be human. To me there are scales of Life and software is a pointer to us of what Tolle writes is the vast intelligence at work within us—coded in part in our DNA—and running applications of immense complexity and depth in our heart (circulation), brain and nervous system (thought and intentionality) and throughout our organs – digestion, breath, metabolism – and all in a perpetual harmony that we unconsciously take for granted.

We have been conditioned, perhaps for the sake of our survival and evolution, to conceptualize our “Selves” as individual, separate things – or files. But what if we begin to see ourselves as programs—as active, complex, living applications and agents of consciousness—manifestations of an intelligence that preceded even the existence of the human species.

Viewed from this perspective, Existence, or “Being” itself is an incredible fact of Life. We live it day in and day out but identify completely, for the most part, with only one insignificant component—our assessments (Good/Bad) of “how it’s going”?

Can our experience with software provide a deeper understanding—that our limited perspective of our selves as individual files is inaccurate, and that we are really part of a vast interplay of an immensely intelligently based set of programs?

But what about stepping back and looking at the Big Picture. If we in fact do for ourselves what Copernicus did for astronomy, and take the assumption of our “Selves” out of the center of what is “happening” – how might our perspective on Life, and in fact the way we actually live, be changed?

Tolle calls this artificial concept of ourselves as the centers of Life our Ego—or the chattering Mind, as opposed to Consciousness or Being itself—the software that manifests as us—of which we are both scientifically and largely even spiritually ignorant.

One response to “What Is Software?”